How Transparent Are Lebanon’s Municipalities?

Poor public sector governance is a central obstacle to economic and social development in Lebanon. Coordination among municipalities and the central government has long been particularly problematic, leading to inefficiencies in the way these institutions share and leverage information, such as new regulations. Little information and data on local governance have been systematically collected and shared with the public, contributing to leaving citizens increasingly frustrated and alienated from bureaucrats and politicians.

In an effort to facilitate the exchange of information between central and local governments, the Central Inspection (CI) required in 2019 municipalities to share a range of data on development and governance issues on the IMPACT platform. The platform covers issues such as the administration of the response to the COVID-19 pandemic, the assessment of municipal development, or the publication and dissemination of decisions that govern municipal affairs. The exchange of such information can help ministries make more informed decisions, municipalities learn from each other’s experiences, and citizens have transparent oversight into their municipality’s workings.

Out of the country’s 1,002 municipalities, only 17 received the full score and showed near full transparency and regular interaction with the platform

Transparency of municipalities varies across Lebanon

The ITI shows that municipalities vary in the degree to which they provide different information, which reflects the need for many municipalities to adopt and improve norms of transparency. Out of the country’s 1,002 municipalities, only 17 received the full score and showed near full transparency and regular interaction with the platform (figure 1). Among the most transparent municipalities are Jbeil, Ketermaya in Chouf, and Zefta in Nabatieh, as well as 14 others all over the country.


At the other end of the spectrum, 28 municipalities did not engage with the tool at all, while another 59 showed very limited engagement and received only 1 point. Among the municipalities that did not receive any points are Batroun and many surrounding municipalities, Taanayel in Zahle, and Bafrouh in Nabatieh. Most municipalities have a medium degree of interaction with the platform, reflecting the vast potential to improve transparency with the IMPACT platform.2 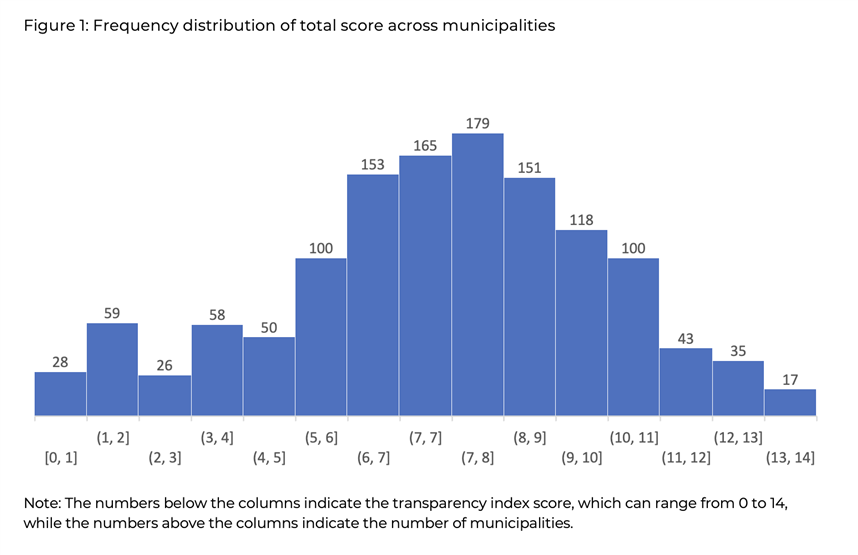 ITI scores varied slightly across regions. Municipalities in the Bekaa are on average more transparent and rank highest on our index with 8.3 points, while neighboring Baalbek-Hermel ranked lowest with only 6.4 points (figure 2). The Bekaa also provided the most complete data compared to other regions, while Baalbek-Hermel and Mount Lebanon had the least complete data. Municipalities in Akkar show the lowest frequency in interaction with the tool, as they interacted with it mainly in March and April of 2020, and have a highly concentrated attention to only few issues. The largest municipality of the country, Beirut, ranks above average with 9 points. 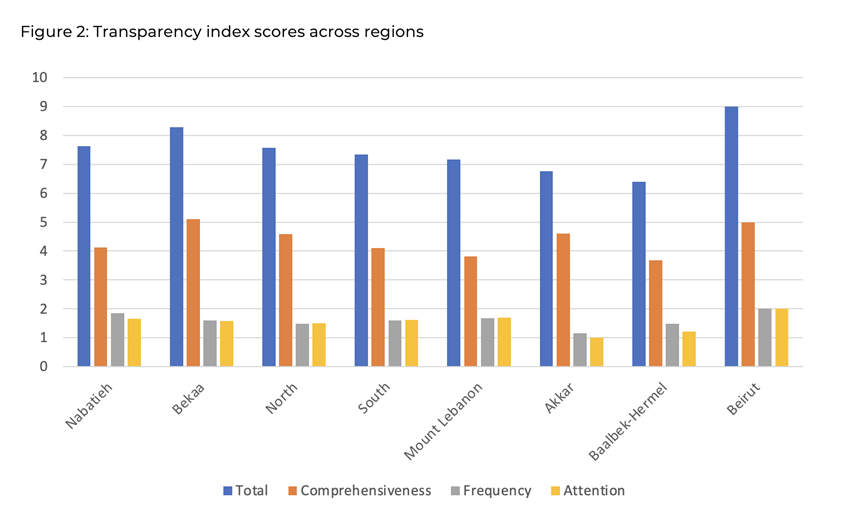 As municipalities were to assume many responsibilities for service provisioning on behalf of the central government on Lebanon’s road to recovery, improving transparency of municipal governance will be important in the future. To that end, the Institutional Transparency Index offers a novel way to advocate for greater information and knowledge sharing among local governments, to increase citizens’ participation and accountability of politicians.

1- For each dimension, municipalities obtain points which are aggregated to compose an overall index, ranging from 0 to 14 points for the most transparent municipality. For more information on the methodology, see: The Policy Initiative. 2021. “Strategic Guidance Notes for IMPACT.”

2- A list of all municipalities can be found here: https://impact.cib.gov.lb/home?dashboardName=user-activity.