What Determines the Transparency of Municipalities?

The Effects of Networks and Neighbors

Transparency of decision making is an important prerequisite for good governance, economic development, and citizens’ trust into the state, both for central and local governments. In Lebanon, municipal governments assume important functions for local development as they serve as a direct point of contact with citizens and take over many responsibilities for service provisioning, such as waste management or road works. Facilitating transparency of municipal governance is therefore an important prerequisite for a sustainable recovery from the present-day overlapping crises and the restoration of trust in state institutions.

What are the factors driving transparency?

In an effort to understand how to enable municipalities to become more transparent, we investigated several factors that can drive transparency. A range of factors could determine a municipality’s transparency, such as its wealth and capacity to employ personnel to do data work, its size and necessity to collect data for larger operations, or its strategies to share data to gain citizens’ trust. Identifying the factors driving transparency can help policymakers to devise options to enhance both the capacities and incentives for municipalities to become more transparent.

We find that variation in transparency is not driven by a municipality’s revenues, its level of economic development, or its size, based on statistical analyses by which we take into account the effect of other factors that could influence the results.2 This means that the availability of resources to deploy or people to govern does not affect a municipality’s degree of transparency. Even the affiliation to political parties plays only a minor role as only Hezbollah-run municipalities have statistically a lower transparency score than others. These are important findings as they direct attention to other less tangible factors.

Networks could play a role in municipal transparency 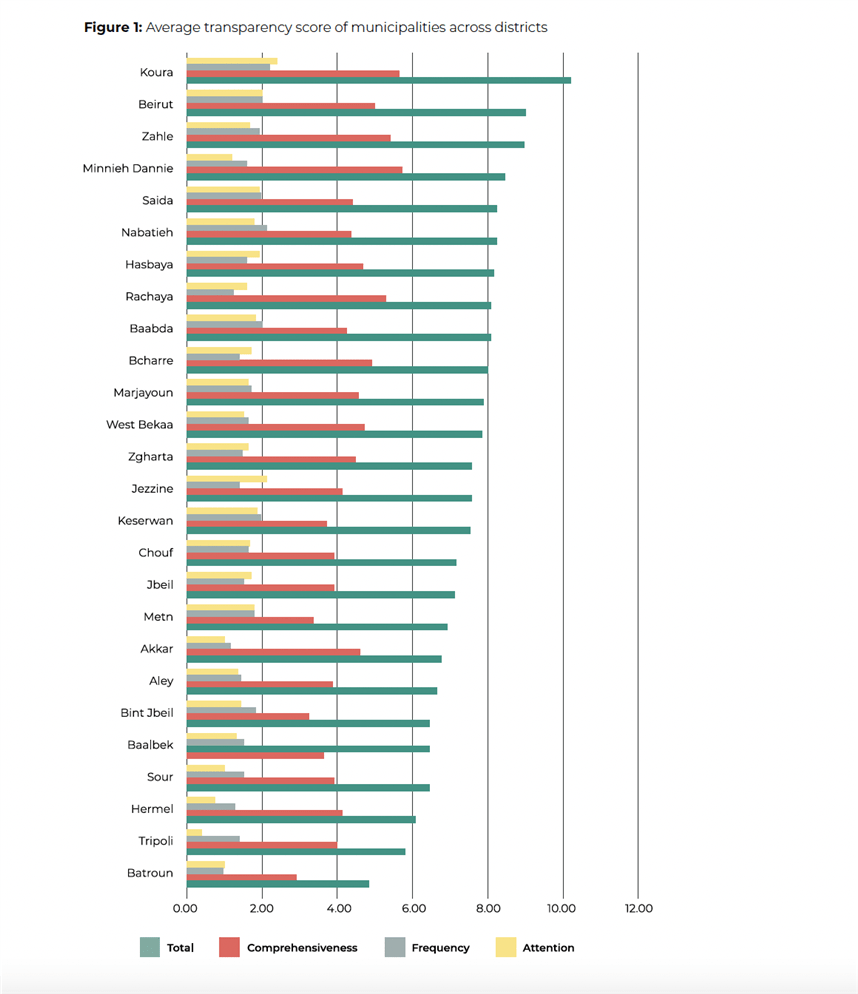 These results suggest that municipal transparency may be driven by network effects. Neighboring municipalities exchange information and seem to influence each other in their usage of the IMPACT platform. This finding poses both a challenge and an opportunity: Municipalities can incentivize themselves to become more transparent once a critical mass of neighboring municipalities perceives the need to do so. The findings also suggest that relationship management for ministries and international actors that aim to work with municipalities is of crucial importance in order to facilitate accountability and effectiveness of local governments.

1- A full description of the methodology for the index can be found in: The Policy Initiative. 2021. “An Institutional Transparency Index for Lebanon.”

2- For this analysis, we take the municipal transparency index as the dependent variable and a dummy as well as a categorical variable for the leading political party as core independent variables. We include a number of control variables, including a municipality’s population size, economic development, revenues, and poverty incidence, and cluster the standard errors in different specifications at the regional and union level. All details can be obtained from the authors upon request.