How Have Municipalities Interacted with the IMPACT Platform?

As Lebanon was coping with the COVID-19 pandemic, municipalities were placed at the forefront of the management of infection outbreaks. To streamline the communication between central and local authorities, the Central Inspection launched in April 2020 IMPACT, the country's first e-government platform. Due to the critical situation in which they are, almost all municipalities and mukhtars responded to the request and have accessed the platform at least once, although not on a constant basis over time.

The IMPACT platform tasked municipalities and mukhtars to report on a range of issues including COVID-19 metrics and decisions, development indicators, their needs, and their vulnerable households. Between April 2020 and February 2021, the interaction of municipalities with the IMPACT platform was largely limited to two forms: The Ministry of Social Affairs’ (MoSA) aid form, known as the vulnerable household survey, and the quarantine modification form, which is where municipalities reject the registration of new COVID-19 cases in their areas.

Both forms present potential benefits in the view of municipalities. Indeed, submitting aid applications gives municipalities direct benefits at the political, economic, and social levels by offering financial support to vulnerable households, which could help decrease social tensions and reenergize clientelist channels. And when municipalities reject the registration of new COVID-19 cases in their areas, it can help delay or hedge municipal lockdowns, particularly after the government adopted a decentralized lockdown strategy between October and November 2020.

At the national level, municipalities used IMPACT the most during the early stages of its launch: Nearly one half of all forms (48%) were submitted in April 2020 alone, followed by 8% in May. The peak in form submissions, particularly in April 2020, coincides with a three-week window set on filling out MoSA aid applications. In fact, of the total forms registered in the month of April, 99% were vulnerable household surveys. These served to help the government target eligible households for cash-assistance under the National Social Solidarity Program—a six-month cash-transfer program introduced exceptionally during the pandemic by the Presidency of the Council of Ministers and MoSA. The program, however, faced a number of delays due to bureaucratic processes and the audit and verification of the list of beneficiaries.

The suspension of the MoSA aid form in May 2020 sparked an abrupt change in the interaction of municipalities with the IMPACT platform, indicating that there was a loss of incentive to use it (figure 1). 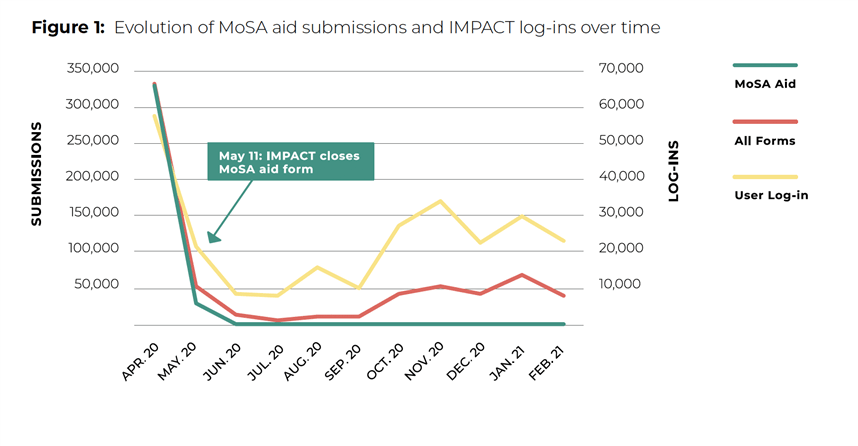 Between June and September 2020, around 500 municipalities completely stopped using the IMPACT platform, leading the average number of log-ins on the platform to be four times smaller than between April and May 2020. Municipal engagement increased again in October 2020 and remained relatively steady until February 2021. This change coincided with the government’s decision to impose municipal lockdowns, which drove municipalities to regularly review the accuracy of their daily registered infections. As a result, IMPACT’s quarantine modification form accounted for 72% of all form submissions, compared to 5% between April and September 2020. Knowing that municipal lockdowns were implemented based on the ratio of daily COVID-19 infections per 100,000 residents, municipalities were incentivized to reject quarantine cases in their areas in order to hedge or delay lockdowns.

Lebanon’s local governments have shown cooperation with the IMPACT platform and enabled residents, the primary stakeholders, to follow their activities. However, our research revealed that some municipalities had frequented IMPACT forms that carried short-term incentives over others that did not, leaving an inconsistent interaction with the platform. As the role and importance of access to accurate information continue to grow today, municipalities and central authorities must be impartial and pro-active in cooperating with open-data initiatives that serve to rebuild citizens’ trust in state institutions.